Part of practicing photography and learning how to do it better is learning what interests me visually and trying to represent that in a way so it translates to others who may view my image. It’s hard and the practice feels abstract to my very logical, verbal mind. It’s not like writing a thesis, that’s for sure. So today’s images I’ve grouped into three distinct themes, two of which I’m starting to see in my work, and the last is something I’d like to get better at: shades, clouds/skies, and capturing people/stories.

I was out in Harvard Square over the weekend dancing with friends. I figured it would be an excellent time to bring my camera. 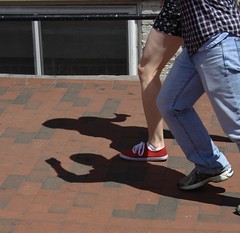 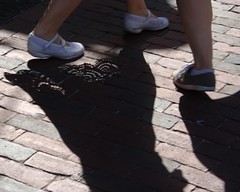 We were dancing in the mid-day light, so the shadows were incredibly striking. I decided that rather than capturing the people who were dancing, I’d try to capture the movement in their shadows. These are the two best examples I managed. One is a little fuzzy, but I really like this as a way to capture people dancing. I will have to experiment more in the future.

I like clouds and sky as a subject. But making them interesting and grounded (ironic phrasing for sky…) is difficult. Just pointing my camera upwards and taking a picture, even if the cloud formations are interesting, often loses the drama I find so fascinating in the sky. I’m learning, through all that book readin’, that it’s part of the challenge of taking a three-dimensional subject and turning it into a two-dimensional representation. The trick, I’m discovering, is finding a way to build in dimensionality by putting objects in the foreground and create that enhance the drama. 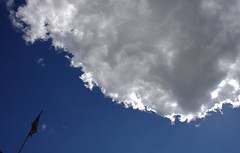 This first image I used a flag pole reaching up to provide a false-sense of scale. The blue of the sky and the gold edge around the dramatic cloud formation appeals to me. The balance between the puffyness of the cloud and the stark linearity of the pole creates a weird tension that is also appealing. 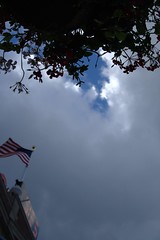 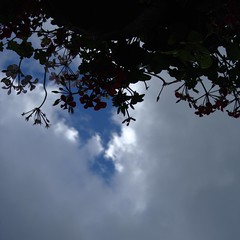 The other two images are from the same vantage point. The first taking in more elements to “ground” the colors of the sky, the second eliminates the building and focuses on the silhouette of the basket of flowers. The clouds in the second get at little fuzzy, but I kind of like it because it makes me focus on the colors of the sky rather than the drama of the clouds.

Finally, people. I’ve written a bit previously about my discomfort with taking pictures of people. It’s invasive and I feel like a voyeur. I’m also hesitant about the ethics of taking photographs of people and sharing them online. But I’ve also begun to notice how bland images can be without that personal element. And I want to get better in general, so I’m trying. This dancing endeavor was a perfect opportunity to practice because I know the people and I also dance which I figured would help me anticipate action to get a well-framed shot. I had some success. The following four images I consider pretty good. They capture motion or a story or the excitement of the music. A few even have some pretty good framing. I could find fault with all of them, but I’d rather let them tell the story of the experience and hope they transmit the emotion of the afternoon. 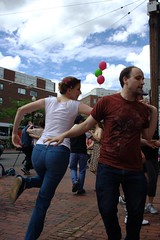 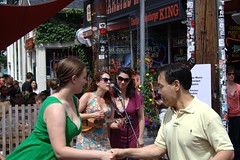 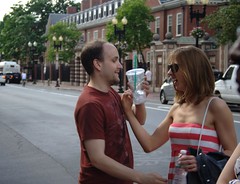 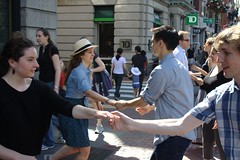 The last image I’ll share, although I admit I’m hesitant to do so. The lack of permission from the two subjects, neither of which could give me permission for two different reasons, makes me nervous about the ethics. But I really like the reasons behind why I composed this shot, so I’ll make it public anyway and include the story behind it.

At the music festival, sitting and listening to one of the bands perform, I noticed this woman. She was clearly enjoying the music, dancing and bouncing around in her chair, and expressing her joy at the experience. She was also appeared to be non-verbal, but her smile was just so incredible that I was drawn into her happiness and wanted to capture her enjoyment. I was having trouble catching her smile just right. Then this infant got rolled up to listen to the music as well. But instead of focusing on the music, she began to focus on the woman. Her intense expression of consideration and uncertainty at this woman whose appearance is culturally non-standard was such a juxtaposition. It made an interesting story within an image. After a few tries, I got this great shot of the infant looking at the woman who was looking to her caregiver with such a smile. I’m actually quite proud of it. (The only blech part of the image is the stupid Mountain Dew bottle) 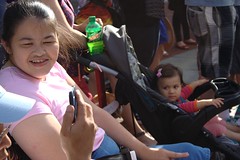 I only took two pictures today. So rather than select a best, I took one of them and played with the color levels in Gimp. I’m not overly interested in manipulating images in photoshop – yet. But it’s fun to see what the technology can do. 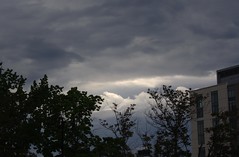 This first image is the “original.”  It’s a tif copy of the raw file. The sunlight was just peeking through the clouds, making the blues intense and the golds vibrant. I decided to play with that effect.

The second image I focused on darkening everything except the stream of light. The third, I darkened the blues and lightened the lights. And the fourth image I tried to bring back the color in the foreground. Because I didn’t use any layers to separate changes in the levels to get some combination of the above, the last image is less striking. I still have the raw file. So perhaps some day when I’m feeling ambitious I can do that. 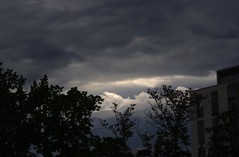 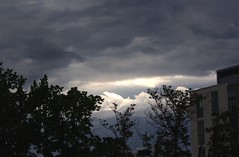 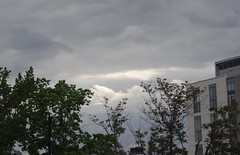